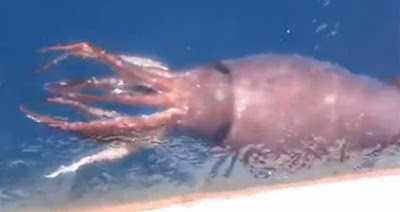 This video come from a Russian commercial vessel that was deep fishing in the Ross Sean in Antarctica.

While deck men attempted to pull up a huge fish they had gaffed, a giant squid wrapped its tentacles around the fish and engaged in a tug of war with the fishermen.

This colossal squid is the heavier of all squids, and are believed grow up to 40 feet long.