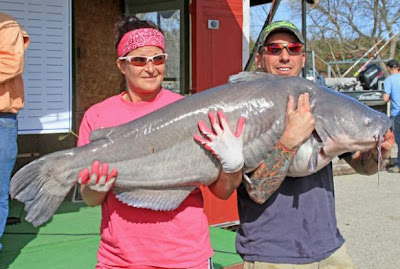 A Kansas fishing couple have their personal records.

In fact Stefanie Stanley, reeled in a 82 pound blue catfish at Milford Reservoir in Kansas the past weeknd. Rich Witt, (Catfish Chasers tournament iowner) said that probably it is the largest blue catfish ever caught at Milford, and the largest from any lake in Kansas.

As big as it is, though, it was about twenty pounds shy of her tournament partner and husband’s best-ever blue catfish. He  holds the current state record for blue catfish at 102 pounds 8 oz, caught from the Missouri River  last year in August.

According to the anglers, the big fish was released alive back into the lake.

Catching blue catfish between 20 and 40 pounds is now common at some lakes, like Milford and Melvern Reservoirs.