Here all the hot catches news of April 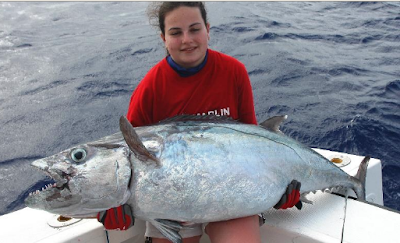 IGFA Captain Yann Colas has been guiding anglers out of Mauritius for years. During his time on this island nation in the Indian Ocean, he has put anglers on some amazing catches – the most recent being a dogtooth tuna (Gymnosanda unicolor) that tipped the scales at 28.5 kg (62 lb 13 oz). French angler Cecile Klein was slow trolling a live bonito off Rodrigues Island, Mauritius on March 5, 2013 when the toothy tuna nailed the bait and started peeling line off her Shimano 50W. After a tough 15 minute fight, the 11 year old Cecile was able to subdue this potential female Junior angler record. The existing IGFA record, also caught in Mauritius, currently stands at 23 kg (50 lb 11 oz). 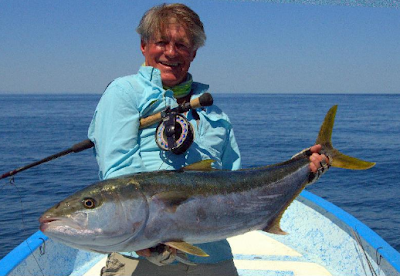 California native Gary Bulla was fishing off Cerralvo Island, Mexico on March 17, 2013 when he landed a 15.82 kg (34 lb 14 oz) California yellowtail (Seriola lalandi) while fly casting with local guide Valente Lucero. After eating a custom sardina fly, Bulla’s yellowtail pulled him around the Pacific Ocean for an hour and a half before being boated. With the current men’s 8 kg (16 lb) tippet class record standing at 14.51 kg (32 lb), Bulla’s fish qualifies him for the potential new men’s 8 kg (16 lb) tippet class record. 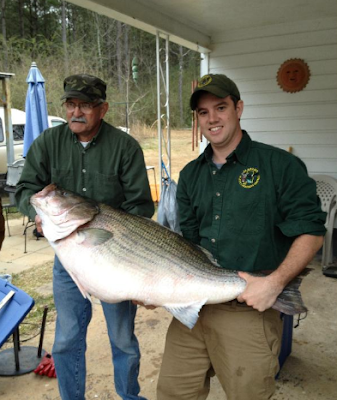 While fishing the Black Warrior River in central Alabama on February 28th, James R. Bramlett landed a massive landlocked striped bass (Morone saxatilis) that could earn him the new All-Tackle record. Bramlett, a native of Alabama, pulled up to his fishing spot at around 11 am and immediately noticed big stripers busting schools of shad on top of the water. He quickly hooked a live shad and tossed it in the vicinity of the action. Bramlett’s outfit was soon slammed and he knew he was hooked up with a quality fish. After a 30 minute fight on 30 lb tackle, Bramlett landed the catch of a lifetime that tipped the scales at 31.55 kg (69 lb 9 oz). The existing IGFA record is 30.61 kg (67 lb 8 oz).