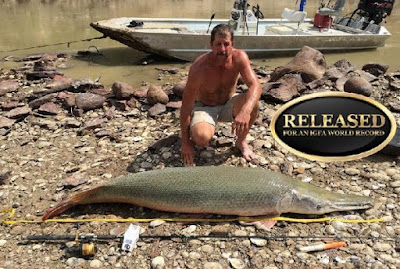 Angler Phillip Miller of Mankato, Minnesota, USA pulled this enormous alligator gar (Atractosteus spatula) from the Trinity River in Texas, USA, while fishing with Capt. Bubba Bedre on September 25th. The fish ate a piece of cut bait Miller was fishing on the bottom, and put up a brutal 30 minute fight before it was carefully landed, weighed, and released alive. Tipping the scales at a whopping 86.9 kg (191 lb 9 oz), Miller’s gar would surpass the current men’s 60 kg (130 lb) line class record, which stands at 72.12 kg (159 lb). 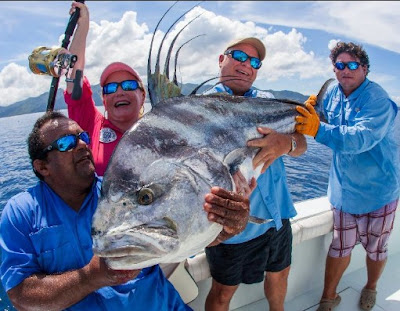 Angler Sjon Harless of Mobile, Alabama, USA caught this impressive 30.4 kg (67 lb) roosterfish (Nematistius pectoralis) on November 2nd while fishing out of Flamingo, Costa Rica. Harless was fishing aboard the Plautus, captained by Luis Ruiz Ruiz, when the potential record rooster ate the live ladyfish she was using for bait. After a tough 15 minute fight, Harless had the fish subdued and was on the way back to shore for an official weigh-in. If approved, the catch will replace the women’s 60 kg (130 lb) line class record which currently stands at 29.16 kg (64 lb 4 oz) – and is also held by Harless.