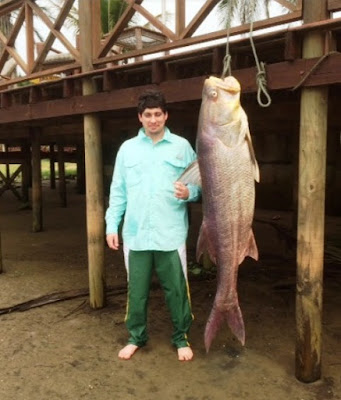 South African angler Stephan Bellingan potentially set the new All-Tackle record for giant African threadfin (Polydactylus quadrifilis), with this magnificent 55.4 kg (122 lb 2 oz) specimen he caught on July 20th while fishing the Kwanza River in Angola. Bellingan was casting a soft-plastic bait when the fish struck hard and became hooked. After fighting the fish for nearly an hour on spinning gear, Bellingan was finally able to subdue and land the potential world record fish. The current IGFA record stands at 49.6 kg (109 lb 5 oz). 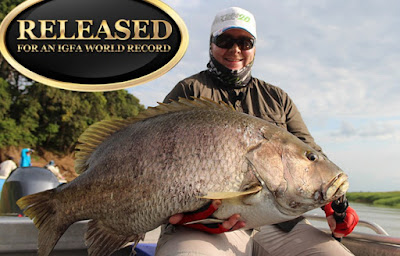 Aussie angler Joshua Pearson caught what could become the new All-Tackle Length world record for the highly sought after Papuan black snapper (Lutjanus goldiei). Pearson landed this monster while casting a plug along a shallow bank of the Aramia River, located in the Western Province of Papua New Guinea. After crushing the diving plug Pearson was casting, the hard-fighting black bass took off like a freight train to the nearby submerged debris to free itself. Luckily, Pearson was able to stop the fish and eventually subdue it after a 10 minute fight. Once landed, Pearson quickly snapped a few pictures and properly documented the catch before releasing the fish back into the river. Measuring out to 88 cm in length - and weighing only 2.5 kg (5 lb) shy of the All-Tackle record - Pearson’s catch will easily earn him the All-Tackle Length record if approved.