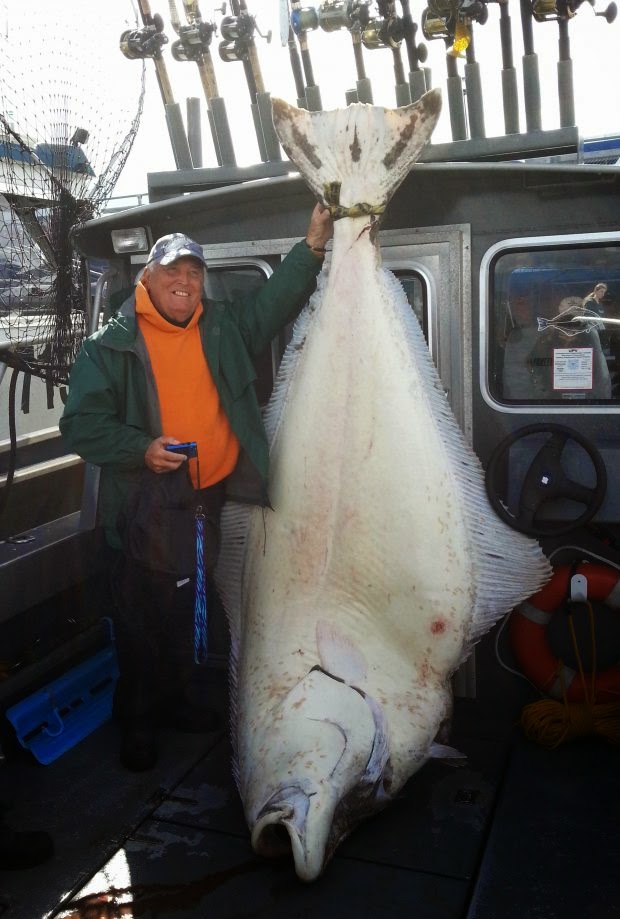 A monster size halibut was caught the past wee in Alaska; although is one of the largest landed in the Pacific Ocean in a decade, it will not make the record books.

The 482 pound - 218 kilo halibut surpassed the previous record of 459 pounds - 207 kilo, also caught in Alaska.
Unfortunately the old angler Jack McGuire lost his chance at the top spot in the IGFA (international Game Fish Association - www.igfa.org) record book when he asked for help during the 30 minutes fight.

McGuire  was deep water fishing off Glacie Bay, near Gustavus when hooked the big fish; he was on board the 28 feet catamaran of "Six Pack Cahrter" with Capt. Rye Phillip.

The monster size halibut was caught on a bottom of 130 feet near Lemesurier Island with a chunk of fish on a 100 lb line with a 240 lb mono leader.

Seems that McGuire's halibut isn't the only Alaskan fish to miss the record book. Two halibut caught few yeas ago were estimated at 466 pounds each, according to the Alaska Dispatch. Unfortunately neither of the communities where the fish were caught had big enough scales to officially weigh them.

The current world record Pacific Halibut was caught here in Alaska in Ducth harbour in late 1996 by angler Jack Tragis.

You can see more huge Pacific halibut at Big Fish of the World we site.