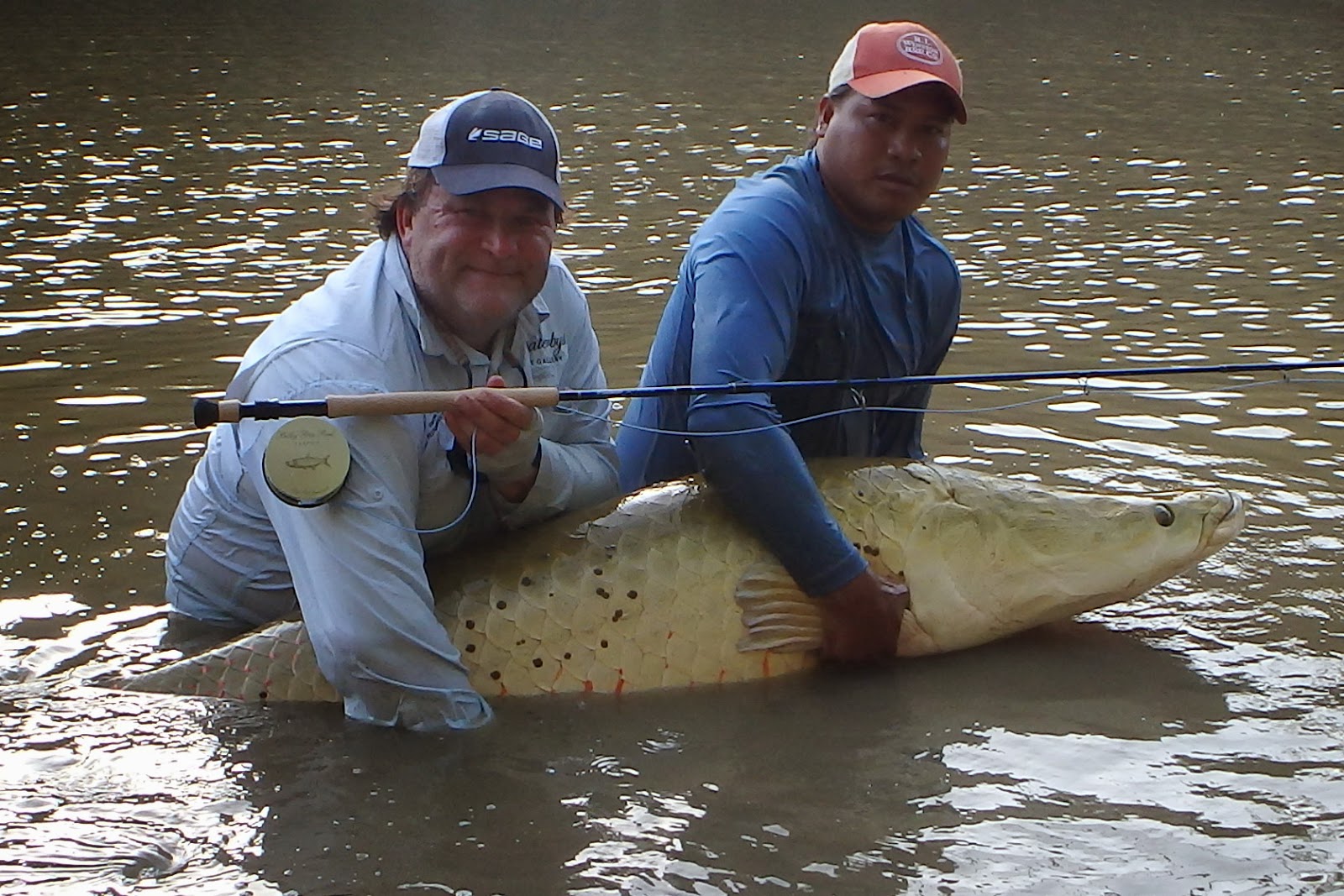 Richard Hart traveled for the first time to British guyana's in 2014. There he went to the Esequibo river to chase new IGFA world records for the “wolf fish” aka trahira. During that previous expedition, he gave a shot as well as trying to capture an arapaimai on the fly. Though he did not have the right flies, he succeeded by hooking into two of them, weighing respectively 70lb for the smallest, and 300lb for the biggest.

What he learned and experienced from that brief encounter with arapaima made him wanting to return to Guyana, so he could challenge himself trying to achieve the near impossible task of hooking up, landing, and breaking the current 339 lb IGFA All Tackle world record for that fish, currently held by TV host Jakub Vagner.

So last February, at low water level time, Hart with set off deep into the mountain jungles of Guyana. It was the perfect time of the year as the rainy season has ended so the ponds left behind along the river hold the arapaima gigas. A fish legally protected against hunting and harvesting by the government of Guyana, the local Rewa Amerindian tribe, and operators.

As they come up to breathe air, an accurate cast would have to be made in the direction they are travelling. Richard was well prepared to make a lot of casts, for days if necessary, in a very hot humid jungle, in order to hook up with these fish. He had been training for years, in the same kind of hot and tough conditions, in the wilderness of the jungles of Thailand, while fly fishing close to the Burmese border for the giant snakehead (channa micropeltes), with his close friend and jungle fishing ace, Capt. Jean-Francois Helias (www.anglingthailand.com). 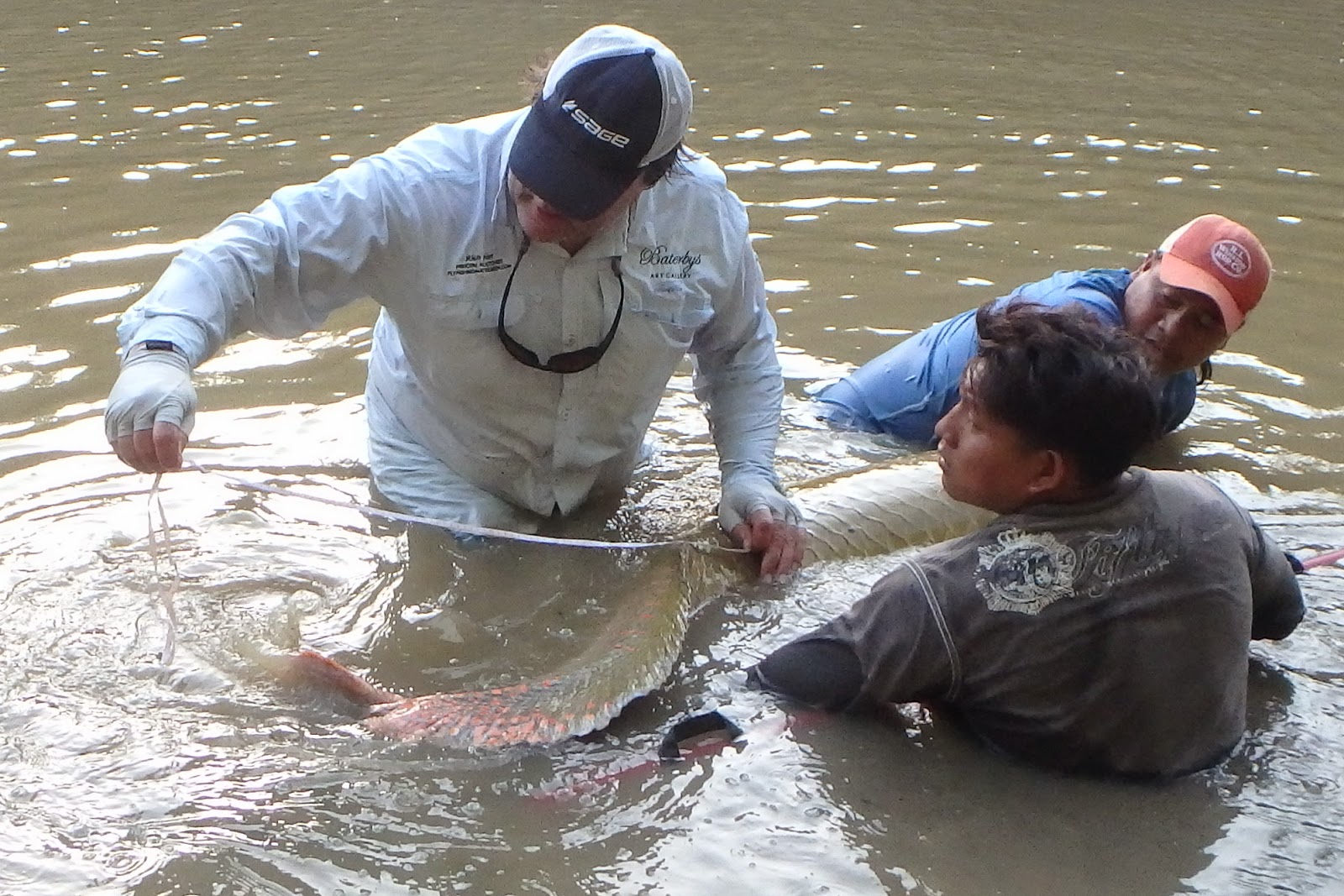 This time, Hart was going to fly fish the Rewa river, and up to and beyond Corona falls. A place so wild that scientific groups are regularly going up and discovering new species of insect, amphibians, and other animal life.

The fly of choice for that ultimate challenge was a Rainy’s Chuck and Duck, good baitfish colors, and a strong enough hook to handle such a large fish. In order to not only get the large fly out there often at over 50 feet, but also sometimes quickly, Hart used a wt 16 Sage SALT model rod size rod. A fast action rod for big flies, strong tip, with excellent forgiveness in the line direction for all the many imperfect false casts made. Another good reason to choose this size of Sage SALT fly rod, designed to handle large tarpon, sailfish, and marlin, was to tire the fish quicker when hooked so it would be a lot less stressed, and have an excellent chance at a good recovery. These fish can die if not handled properly, or played too long on light or inadequate equipment.

A Tibor Billy Pate Tarpon reel was Hart’s reel choice, in order to have the drag capability, when applying pressure to the fish. It was loaded with RIO 100 lb. Dacron backing in case the fish went off on a long run. Arapaima often run direct for submerged trees and wood, so it is important to keep them out of these snags.

A RIO 500 Grain Floating line enabled the fly to move quickly and easily to the intended spot.

The two boatmen , one who steers at the front, and one to guide from the back, and the fisherman have to be extremely quiet. Complete silence is needed in the boat, as the Arapaima’s long bodies, hence their long sensory lines, will detect your presence, get stressed and agitated. When this occurs they will come up quicker for air, and turn back on themselves, before going back down. So in this situation a cast is needed in the opposite direction to how they broke the surface. When they are really stressed they will slap their tail hard on the water’s surface, as they turn back around and go back down. This warns the other fish of the angler presence. When on the opposite the Arapaima is relaxed and unaware of your presence, they come up for air, and go down in a straight line to the depths of the pond. It is then you got to make a well-timed and accurate cast.

After several hot and humid days of fishing in the Guyana jungle, after hundreds and hundreds of casts with flies so big they are called “chucking a chicken” or “chuck and duck”, no takes or hits had occurred. But Richard still had faith. What he needed to achieve greatness was only one cast, done at the very right time, at the very right place. One afternoon, he finally got his shot. A large specimen was on a feeding frenzy chasing baitfish and peacock bass. One cast a few feet ahead, and a few feet to the left of where the Arapaima had broken the surface, and the weight of a hungry mega size fish pulled the RIO line tighter than expected.

Fish on! To decrease the playing time, the Sage SALT rod was pointed low, and at angle of about 10 degrees from directly at the fish. This gave maximum pressure. After the arapaima jumped, and went to swim away, with the rod again pointed almost directly at the fish, Richard pulled down and back. This stopped the fish dead in its tracks and would turn it upside down. With the 100 lb. RIO monofilament saltwater Hard Alloy tippet, Hart definitely had the breaking strain capability. The fish would then be disoriented and try and jump right away again. The fish was tiring quicker with each jump. After the fourth aerial display, the Amerindians got into the water and caressed the Arapaima into a weighing sling. It took the angler only 20 minutes to land the fish.
The monster, weighed on Chatillon certified scales, was 416 lb, breaking by over 80 lb the Jakub Vagner’s 339 lb record. Richard Hart’s catch of a lifetime is currently pending homologation with the IGFA. A part of earning him (if homologated) the new IGFA All Tackle world record, the 416 lb arapaima qualifies for the largest freshwater fish ever caught to date on a fly rod.

Follows Us on Google+