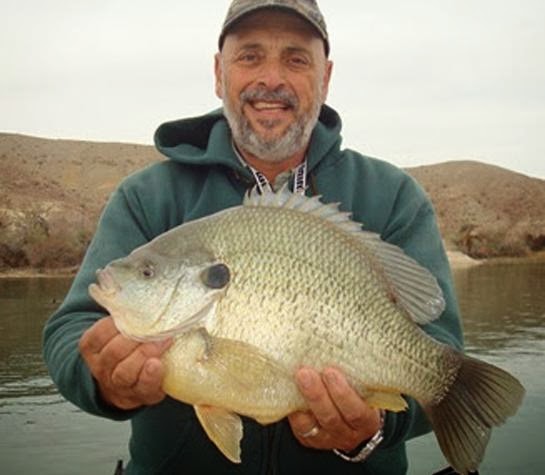 This monster size redear sunfish was caught in Arizona on Lake Havasu the past 16 February. this huge fish was exactly 5.78 lb - 2.61 kg and will surely beat the old world record for this specie.

Angler Hector Brito caught the 17 inch long fish while fishing with a dropshot rig and nightcrawler and took it to a local tackle shop to have it weighed on an Arizona (AGFD) certified scale.

So to officially qualify as a world record, he’ll have to submit a formal application with the IGFA (International Game Fish Association - www.igfa.org). The current world record, for this fish is 5.5 lb caught also Lake Havasu.

It isnt' a too big surprised if a larger sunfish is caught from Lake Havasu, because from some years the lake’s invasive "quagga" mussel population has become a new food source and a reason anglers are regularly finding sunfish weighing 2 lb or more.