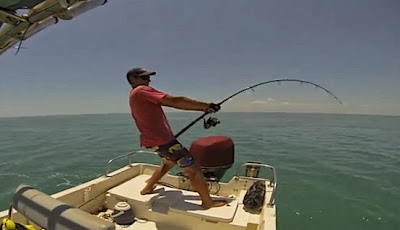 Wonderful Youtube video with excellent soundtrack. Angler Jed Dupe and Jack Benson headed for the Vernon Islands in Australia few weeks ago in hope of getting some GT (giant trevally) spin fishing with big surface poppers.

A very hot action with medium size sharks . According with infos on their Youtube page video they ended up with around 12-15 Sharks around the boat and one of them would slap a lure on the water to keep them there while the other cast their popper.

They ended up landing three and only lost one.

Most fishermen wouldn't even be paid to catch a shark but Jack and Jed weren't going home without some sort of a thrill.