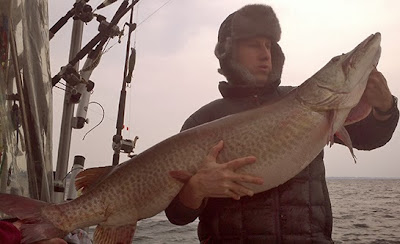 The big muskie, caught Monday, December 2 on the St.Lawrence River out of Clayton, New York; it was 51,18 inches (130 centimeters) long from its lip to the "V" of its tail on an official I.G.F.A measuring device.

So this fish is more than two centimeters longer than the current world record muskie, which Mark Edwin Carlson of Illinois caught on  June of 2011 while fishing the Ottawa River in Ontario.

Forjohn's muskie was released after the photo.

It was caught just near a shoal at Carleton Island, near where the St. Lawrence begins on Lake Ontario.

They submitted all the paperwork for World  Length record to the I.G.F.A. an so now they just have to wait and see if it's accepted.