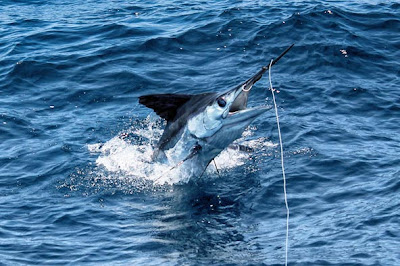 Here below the last Ecuagringo fishing report from Galapagos Islands.

The weather has literary begun to change from one week to another. The Humboldt current making its presence felt as water has dropped from an average 76 to 78 all the way down to 71 to 74 F in most areas around San Cristobal. The blue and black marlin will slow down as a result of the colder water. However the striped marlin fishing many times picks up. Here is a report of the action from the last week.

April 22, 2013 fishing the North East drop with Robert Dow's group onboard the Big Fish water had cooled to 74 F from 76 F the previous day. One tailing stripey was seen and a blue marlin about 400# that charged the boat several times after being hooked finally got the best of us a she cut the line in the props.

April 23, 2013 searching for warmer water Robert Dow and the crew of the Big Fish headed for Floreana Island where water was found to average 75 F on this day. A bite from a blue that peeled almost 300 yards of line before she spat the hook was the highlight of the day along with a large stripey that was tailing down-sea The striped marlin came into the spread to look but did not show any interest and moved on.

April 25, 2013 the winds calmed down a bit and the Big Fish headed to 88 Bank with long time angler and Ecuagringo friend Gerardo Guerra. The stripey bite was petty decent as they managed to raise 15 stripeys with teasers and get 10 bites and 6 releases on the circle hook pitch baits.

April 26, 2013 Gerardo was pretty soar the day before and decided he wanted a last try at some marlin action. 88 Bank was loaded with bait and the Big Fish raised 11 striped marlin and a blue around 300#. They got 7 bites from the stripeys with 3 releases on circle hooks and 1 blue released.