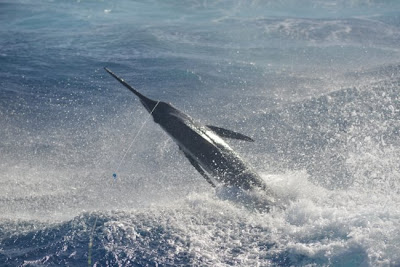 Olaf Grimkowski: yesterday we went to the North West Bank again and on the way there we caught a 175 pound Bigeye tuna.
Fishing on the bank we only raised 1 fish that didn’t switch and had a bite on the way home. Instead two days ago we caught 2 from 2 on pitch-baits and raised 4 more blue marlin that didn’t switch.
At the beginning of the week  we went to the North West Bank today and caught four blue marlin around 300 - 400 pounds on pitch-baits and  we had one bite of a 550 pound marlin and raised two more which one was a monster in the grander class but it didn’t bite the bait.