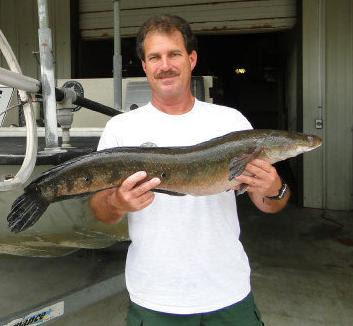 At the beginning of this month in the state of Florida a biologist named Kelly Gestring landed  a big 14 lb 3 oz bullseye snakehead during an electric-shocking expedition  Northwest Broward.

Had the snakehead been landed with rod and reel, it would have beaten the IGFA (International Game Fish Association’s www.igfa.org)  all-tackle record snakehead by over 1,5 lb.

Snakeheads, like some twentyone other species of fish found in Florida’s canals, are not native to the state or US . As such, they impact the environment in a negative way. The fact that  an invasive fish like  Gestring’s can obtain such a weight is proof that the species is making itself at home.