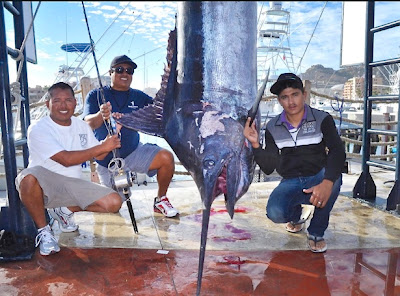 A fantastic epic battle was taking place off the Cabo San Lucas coasts in Mexico yesterday with a monster marlin.

The charter boat "Ziggy", a 32 feet, left the dock Saturday morning on what was supposed to be a half day, or four hour trip. The anglers all senior citizens from Phoenix, Arizona, were no spring chickens and if Captain Manuel Dominguez, understood them correctly, the youngest was 82 years old. They headed up the Pacific to look for tuna as the clients had requested. 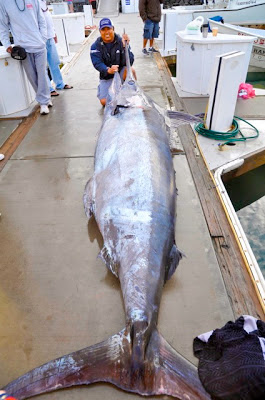 It was 1.20 pm in the afternoon and they were nine miles off of Cabo; time to bring the lines in. Suddenly they got a hit on their right outrigger, their homemade flying fish lure - the line started to peel off the reel at an alarming speed. Cpt. Manuel tough was an huge yellowfin tuna, but around 40 minutes later the fish jumped and they saw that it was a large blue marlin "I thought it was around 800 pound, because I´ve caught two around that size before", said the captain.

They fought the fish for several hours and at  9.00 pm he felt the fish shaking it's head and knew it was jumping - he got the fish boat side, handed the rod to his deckhand and went back to the controls, while his crew gaffed the fish.

They now had a new problem on their hands; how to get the marlin on to the swim step or in the boat. They struggled for half an hour before giving up and tying the head only to the swim step and starting the sixteen mile trip home in the dark. Good to their word the Pisces boys were there to lend a hand when they finally pulled into their slip during the night at 1.30  on Sunday.

There was no way to weigh the fish at that hour, so between them all they hauled the massive fish up onto the concrete dock and left it in the custody of the night watchman, before waving goodbye to the dazed anglers who headed off to their hotel. What a surprise everybody got on Sunday morning to see that huge fish lying there.

In the morning at  8.30 am there was enough help to get the fish weighed and it was hauled up on the marina scale where it registered 987 lbs. Now, it had sat out all night on the dock so at least ten percent of its body weight had been lost, meaning it was at least 1085 lbs putting it in the top 5 largest fish ever caught in Cabo.