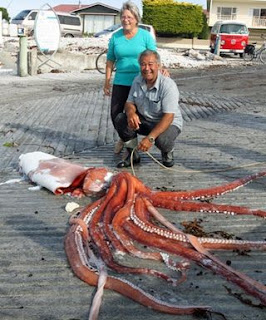 A giant squid measuring 25 feet was found off Kaikoura in New Zealand. this mhuge marine creature was discovered on the surface by Jack and Sharon Osikai.

They need more than one hour to pull it in.

Part of the mantle, or head, was missing and some wondered whether the giant squid had perished during a recent battle with another squid, or some other creature.