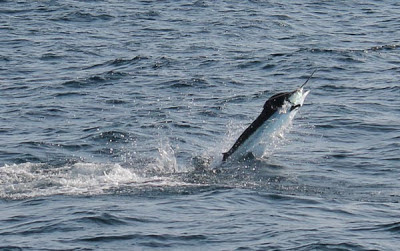 Here the last report from Ecuagringo, a fishing operation based on Galapagos island of San Cristobal:

"We continued fishing Feb 17 and 18, 2013 with Tom Noohnan and Mike Eakins. The seas have been calm and the days sunny and beautiful. You could not ask for nicer conditions.
On Feb 17, 2013 onboard the Vertigo we headed to 0-30 Bank, 25 miles from port. The bank was loaded with tuna and hundreds of birds. Flying fish trying to escape the tuna would find death from above. The scene of tunas crashing into birds was repeated over and over again. After two frustrating hours of fishing with baits we had to pull all teaser only as we caught dozens of tunas and they would not leave us alone to chase marlin. We could have caught dozens more of tunas averaging 20 to 60#. No marlin were produced on 0-30 but we did eventually raise a stripey that did not tease in well near Santa Fe island.

February 18: we headed out to 88 Bank to find it charged full of small tuna. Hundreds of tunas would crash through our spread every few minutes making it impossible to fish for marlin with baits so again we tried teasers. With no luck on striped marlin we fished towards San Cristobal. Tom Noohnan made swift work of a late day blue marlin of 250# to release in under 18 minutes of fight."