Recent catches in Japan, Mexico, Canada, Panama, Australia, and California and Texas in the United States have anglers anxious to find out whether new World Records are about to be theirs! Check out the hottest All-Tackle, All-Tackle Length, line class, tippet, and Junior record applications to cross the IGFA World Records desk this month:
For the second time in the past few months, a Japanese angler has submitted an All-Tackle record claim for a large, unique species of grouper. 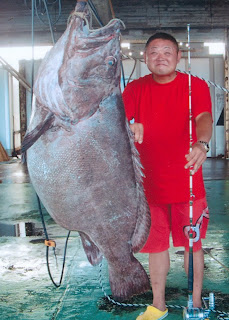 The most recent submission, from angler Takayuki Shibayama of , is for the appropriately named potato grouper (Epinephelus tukula). Fishing with guide Takashi Nakazato on June 4, 2011 off , Shibayama battled this bottom-dwelling monster for seven and a half hours after it inhaled the live snapper he was using for bait. After the strenuous battle, Shibayama’s potential All-Tackle record fish tipped the scales at ( ). The current IGFA record is vacant. 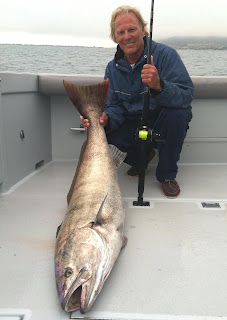 Veteran angler Tom Pfleger of recently submitted another line class record for white seabass (Atractoscion nobilis). Currently holding the men’s () – () line class records – Pfleger’s newest submission of a ( ) catch aims to replace Jimmy Decker’s current () line class record of ( ). Pfleger landed his most recent seabass while fishing south of the border in on June 22, 2011. Forty five minutes after the potential record fish inhaled Pfleger’s live squid and sent his Shimano TLD screaming, the skilled angler had the fish subdued and in the boat. 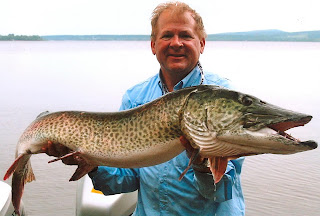 This past June, angler Mark E. Carlson, M.D. of , , took a trip to experience some of the fantastic fishing north of the border in . It was a good thing Mark decided to bring his IGFA Measuring Device, because the fish were biting. While casting a bucktail lure in ’s on June 22, 2011, Mark landed a muskellunge (Esox masquinongy). After a quick five-minute fight, Mark was able to measure, photograph and release the musky; qualifying him for the new All-Tackle Length record. The current IGFA record is vacant. 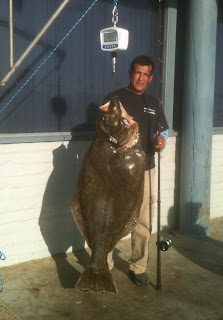 Angler Francisco J. Rivera of , , was fishing for seabass with Capt. Joe Villareal on July 1, 2011 off the cost of , when a massive ( ) halibut (Paralichthys californicus) surprised Rivera by taking the live squid he was free-lining. Rivera had this tasty bottom dweller subdued in 10 minutes, and is now in the running for the new men’s () line class record. The current IGFA record is ( ). 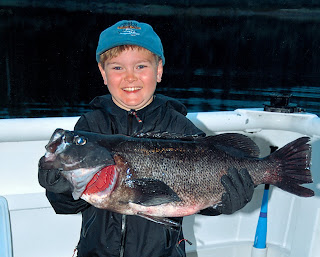 Smallfry angler Cody Konop, of , is no stranger to record fishing. Konop currently holds six Junior records for species such as lingcod and black-blue rockfish, and he may have just bested his current black-blue rockfish record of ( ). Fishing in the on July 11, 2011 with father and captain, Tom Konop, Cody pulled in this ( ) black-blue rockfish
(mystinus) to qualify for the new male smallfry record. Cody needed just seven minutes to land the fish after it hit the Storm Wildeye Shad he was jigging.
native Olivier Charpentier went out on July 4, 2011 to target some of the inshore game species that the surrounding waters of has to offer. Casting a Sebile topwater plug, Charpentier hooked up and landed a huge roosterfish (Nematistius pectoralis) that took the experienced angler 20 minutes to land. After being landed, the fish measured a whopping before being photographed and released – large enough to qualify Charpentier for the new All-Tackle Length record. The current IGFA record is . 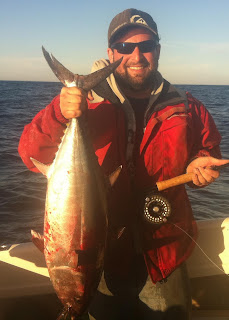 Australian angler David Fent of , traveled west to Port MacDonnell, on May 20, 2011 to target some of the southern bluefin tuna (Thunnus maccoyii) found in that area during this time of year. After getting a fish to take his custom fly, Fent did battle for a grueling 40 minutes before the fish was finally subdued. Back at the docks, the southern bluefin weighed in at ( ) – qualifying Fent for the new men’s () tippet class record. The current IGFA record is vacant. 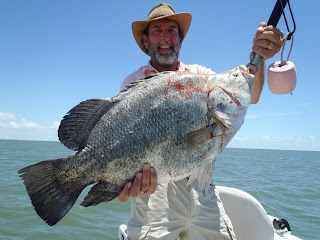 When most anglers are fortunate enough to land a big tripletail, the fish usually finds its way to the ice box and then the frying pan. Angler Stan Nabozny of The Woodlands, Texas, USA, had an All-Tackle Length record on his mind, however, after landing an enormous tripletail (Lobotes surinamensis) while fishing with Capt. Dwayne Newbern on July 8, Matagorda Bay, Texas. After eating the shrimp that Nabozny cast to it, the fish fought for 10 minutes before being measured, photographed and released. Measuring , this fish qualifies for the new potential All-Tackle Length record. The current IGFA record is vacant.
www.IGFA.org