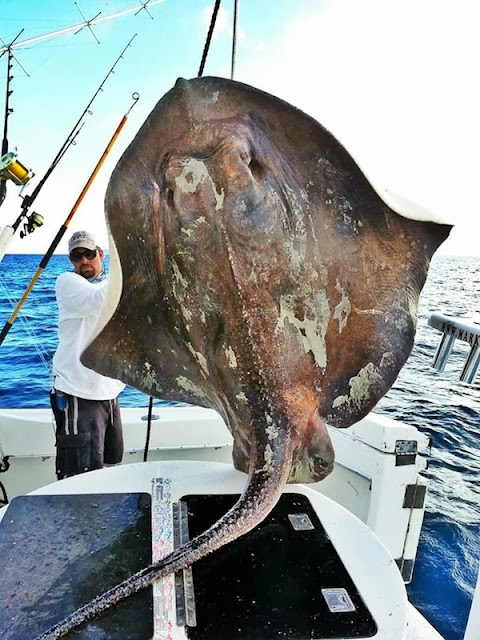 Captain Mark "Shark" Quartiano has caught thousands of different fishes, but never anything like the 800 lb - 360 kg  deep-water stingray he landed off Miami Beach.

Captain Mark, who was fishing with some Japanese fisherman, had dropped a whole bonito tuna to the 500 feet of bottom, before long, line began to spin from his reel.

This huge fish is a roughtail stingray with the scientific name, Dasyatis centroura.
It was a rare catch for an angler and was correctly identified by George H. Burgess of the Florida Museum of Natural History.

It isn't  a common catch and it is very little know about this giant size fish. Seems it resides in deeper continental shelf waters of the U.S. East Coast from off the Carolinas south to Uruguay, and probably in the eastern Atlantic.

Most anglers don’t bottom-fish in these deeper waters so they aren’t routinely seen by that user group.

Captain Mark's crew winched the giant creature out of the water for “three or four minutes” for a photo opportunity before releasing it. It was a big female stingray and she swam away pretty quickly to the deep waters.