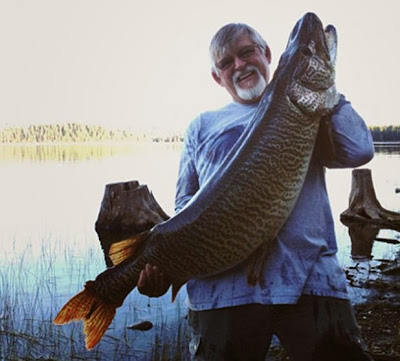 Ed was fishing on Little Payette Lake in  Idaho and was trolling a copper spinner (a l trout lure named "Neon Magi") from his 14.5 feet boat when he hooked the monster fish. He fought the fish with a   12-pound-test monofilament line onto his bait-casting reel.

The fish fought for about 15 minutes before was near the boat and only after an other half hours it was boated.

Kalinowski didn't have a landing net so Kalinowki's fishing buddy tried to boat the fish by placing a loop of rope around its tail and lifting. But the rope kept slipping off and the big muskie was unhooked. So both them grabbed an end and lifted it into the boat

The tiger muskie was examined by a fishery biologist with the Idaho Fish & Game Commission before being certified as a new state record.