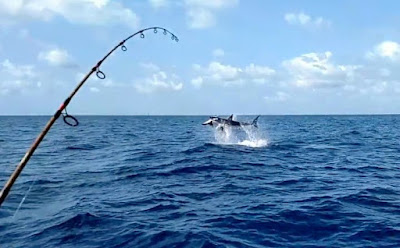 A group of friends while fishing off  Biscayne Bay, Miami  were forced to share their catch after a massive mako shark jumps out of the water for a bite of the fish they had hooked.

The shark was estimated to be in excess of 500 lb and attacked a 60 lb fat sailfish. For sure is one of the rarest video ever seen of a mako shark attack over the surface.

Here a part of the video that was filmed:

Eventually, they brought what was left of the sailfish on board and then cut off a chunk. They baited a hook with it, tossed it out and hooked the mako shark.