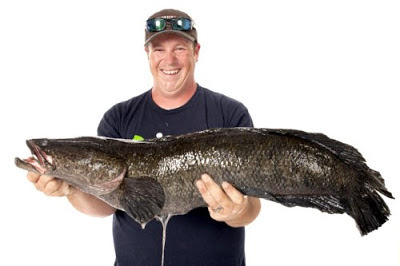 Angler Caleb Newton caught the biggest  northern snakehead ever caught in USA. Also this fish could be the new world record for the specie.

He was fishing on the Potomac River tributary, Newton caught what appears to be the fish of a lifetime

The huge snakehead was  36 inches long and weighing in at 17 pounds, 6 ounces (7.9 kg), is determined to be a record catch by IGFA (International Game Fish Association), it would beat the current hook-and-line record of 17 pounds, 4 ounces, caught in Kagawa, Japan back in 2004.

Caleb  fought the fish e about a minute to get it in the boat; he Landed it on 15-pound-test monofilament line on a light rod.

Next morning, he took his snakehead to the Virginia Department of Game and Inland Fisheries’ office in Fredericksburg. Fisheries biologist  identified the fish as a northern snakehead as a courtesy to help Newton with his pending IGFA certification.