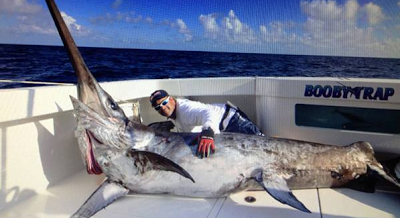 An huge swodfish was landed off Texas coasts and this catch could be the new potential state record catch. In fact this is the largest swordfish ever caught here, the previous record was 341 pounds back in 2011.

The 493 lb - 225 kg catch was made about 100 miles off Surfside and weighed. It measured over 9 feet long. The lucky guys are the "Booby Trap" crew, specializes in catching swordfish and blue marlin.

Here the video of the catch: