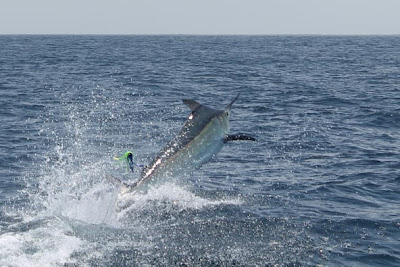 Here the last report from San Cristobal in Galapagos Islands from Ecuagringo.

Continuing our tradition of bringing anglers and some of the best marlin fishing together this last week has been no exception. Conditions continue with wonderful weather most days. Calm seas and water temps ranging from 74 to 77 in most areas. Marlin action has been decent most of the week.

April 15, 2013 the Patricia reported fishing on Bank 0-30 for a day with Brazilian anglers. Captain Yury Gutierrez said the day was nice with 3 to 5 foot seas. Fishing on the bank they released 1 out of 2 striped marlin that bit. They had some nice big eye tunas that averaged 50 lb and a couple of dorado. Around 2 pm they hooked and landed a black marlin estimated around 500 lb.

April 16, 2013 Wayne Hanson and Margie Hanson headed out onboard the Big Fish to Rosa Blanca Bank. There was very little life and bait on the bank and only a 45 lb big eye was caught this day. 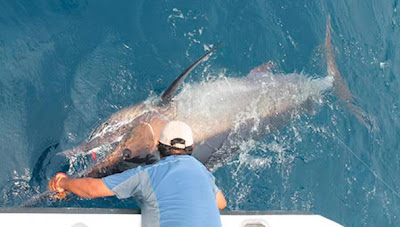 April 18, 2013 again the Hansons headed out on the Big Fish and wanted to try their luck at blue marlin. We fished near Punta Pit on the north drop of the island. Wayne's fish hit around 12:21 and was a very nice black marlin estimated around 700 lb. The fight lasted about an hour. Shortly after the fish was caught Margie Hanson hooked a beautiful blue of about 500 lb. She did a great job catching that stubborn blue in 1 hour 21 minutes.

April 19, 2013 - On board the Big Fish Margie and Wayne Hanson shared their last day by fishing 88 Bank. When we arrived on the bank we were greeted by a large tuna over 300 lb that slammed a bridge teaser. At the same time almost a striped marlin came in the spread but did not hook up. As the day went a total of 8 stripeys were raised with 3 bites and one release by Margie.