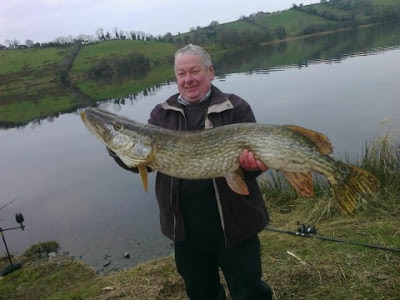 A new report  from the Shercock area of the County of Cavan in Ireland.

A giant pike caught in the past week in one of the small loughs there. Pike angler Brian McDonnell from Lucan in the county of. Dublin and a member of "Dublin Trout Anglers" has been catching some nice pike this year on several venues in Co. Cavan.

Using ledgered half mackerel, Brian hooked and landed a fish of a lifetime. He quickly weighed the fish on certified scales and it weighed 31 pound or 14.06 kilograms. The big pike  was quickly photographed and returned to the water.