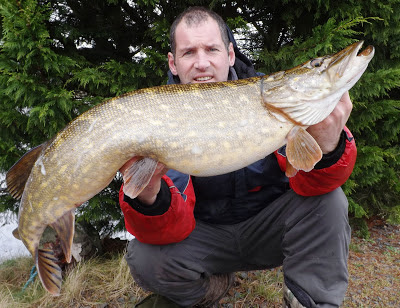 Here a pike fishing report from Melview Lodge in Longofrod, Ireland:
"Dan and friend Sidney from Cork were up for a days fishing with Kevin Lyons of Melview Lodge in Longford, after a number of cancelations over the past month due to bad weather conditions the lads decided they would come up for the day even though water levels were very high and everywhere was in flood.
Kevin said, I decided that due to the weather it was not advisable to fish using a boat so showed them a spot on the banks of the River Shannon. Sidney had set up and cast his first rod out using popped up dead bait and as he was setting rod number two up off went his first rod on a screaming run only for the fish to drop it as Sidney picked up the rod to strike, after this things were quite for a long while until friend Dan banked a cracking Pike to finish a long hard day."