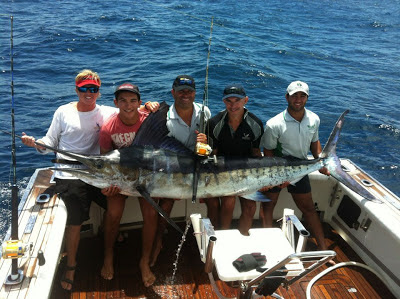 Lot of great marlin action in Port Stephens for black and striped marlin. After the big reels are put up off the Great Barrier Reef, those who are lucky enough to keep fishing, start moving farther down south to chase the marlin.

They can be caught in great numbers, with many of those being caught close to shore. We have been getting constant reports of boats getting five o more shots a day between Blacks and Stripes.

Most recently we have been getting not only great reports, but excellent shots from angler Househam Jay  fishing on the "Freedom". Over the last five days, they have released 26 Marlin, with the most recent day going four on five, which consisted of three Black Marlin (up to  300 pound) and a Striped Marlin.

To add to the fun, the angler on board "Freedom" are using 30 pound test as well, so these fish are a lot of fun on light tackle. The season is just kicking into high hear, so expect to see more great numbers.