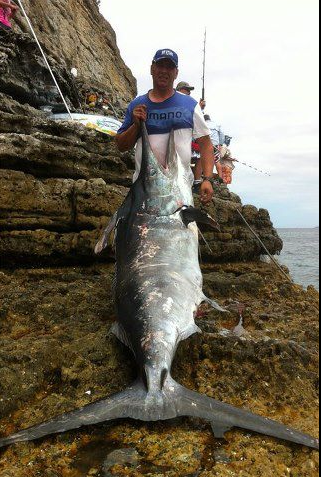 A great catch from Austrialia coast. Well-known Australian angler Adam Dia realised a long-held dream on January 24 when he hooked, fought and landed a massive 333 pound 151 kilo black marlin off the world famous Tubes in Jervis Bay, on the New South Wales South Coast in Australia.

The big marlin  took a live fish under a balloon. Adam used 50 pound Momoi line fished on a Shimano Tiagra 50W and a custom 800 XH Calstar rod built. The hook was a 7/0 Mustad Seamaster. The fight was a surprisingly short, only 28 minutes.

About the same time this fish was caught, we heard of another anfler getting spooled at the Tubes by a big billfish.