GUATEMALA 91 sailfish in on day! 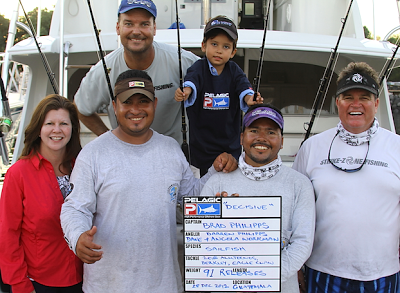 Guatemala is known for its unreal numbers of sailfish and as December rolled around, the fleet was in full swing, posting up double-digit days. After a very short Christmas break the bite really turned on and Capt. Brad Philipps and his crew on the Decisive got into on some non-stop action.

Philipps, who operates Guatemalan Billfishing Adventures  released 40 sailfish from 49 bites on December 27th, finding a massive body of fish just 7 to 14 miles offshore.
On the following day Philipps became witness to one of those unbelievable bites that most fishermen can only dream about  "Decisive" released 91 sailfish from 114 bites.

Dave Workman of Jacksonville, Florida, released 73 of those sailfish himself, all under IGFA angling rules. This could very well be a new world record number of releases for a single angler in a single day. Workman had chartered the boat and was fishing with his wife Angela.

Angela released an additional 10 sailfish and Darren Philipps (the captain's 4-year-old son) helped out with the triple-headers, reeling in another eight sailfish.

Over the Workman's three-day trip they caught and released 182 sailfish and a 450-pound blue marlin.

The Decisive released more than 400 sailfish in a 10-day period, with other days topping 50 and 60 releases. It has been an exceptional start to the year and what many are saying may prove to be one of Guatemala's best seasons ever.