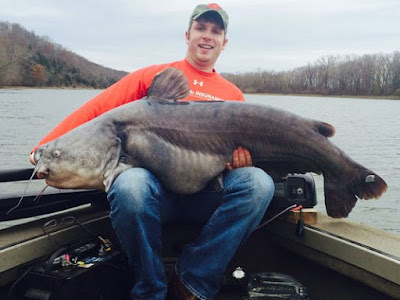 The famous Cumberland River in Tennessee, in the past years, has produced some huge  blue catfish.
This time was Tyler Schmid and Dave Plowman to hook up a big monster cat.

They were fishing on the river in Stewart County when the big catfish hit.

A ten minute battle on 50 pound line ensued, eventually bringing this massive blue to the boat.
The fish was measured in 51 inches with a 37-inch girth, it was by far the largest catfish that Schmid had ever caught. After few photos the catfish was released into the river. The approximate weight should be 90 pounds - 89.5 kg or plus.

Considering the size, it turned out to be fairly close to the 112 pound - 50.7 kg record blue catfish caught from the same river back in 1998.