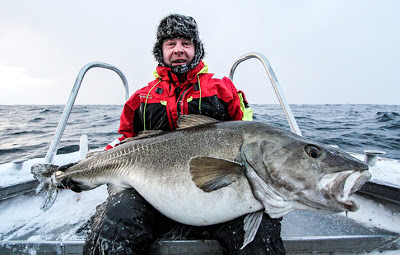 At "Nordic Sea Anglings" camp on Sørøya Island in Norway, the first guests arrived and spend the first week of March facing though conditions and very unpredictable weather. The biggest Atlantic cod caught during the first week was 60 pound - 28 kilos, but unfortunately the weather didn’ t allow the guests to spend much time on the best hot spots.

During the 2nd week of fishing, the weather has been better but still a bit unpredictable. Never the less the guests are able to fish and right now the monsters are being caught.

A huge size Atlantic cod is above 75 pound - 30 kilos and the first one of the season was caught the 8 th of March. It took the scale to 68 pound -  31 kilos. The day after the fishing was even better and in an area found two or three nautical miles from the camp over fifteen cods over 45 pound - 20 kilos were caught. The biggest was a super-size cod weighing 72 pound - 33 kilos. The lucky angler was Stefan Smith from Sweden. The day after another monster size cod was caught: 71 pound - 30.5 kilos!