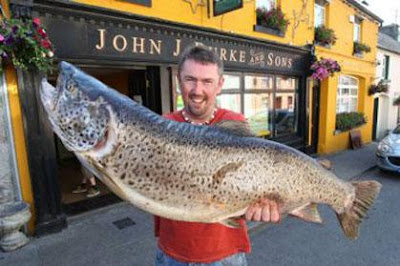 A monster brown trout (ferox trout) has smashed records in Ireland much to the delight of Welsh angler Ceri Jones in Irland. The angler landed the 24 lb trout on Lough Corrib last weekend and the photo of his giant catch has attracted worldwide interest.The specimen fish, already unofficially recognised as the second largest on record, was caught in deep water near the lake’s largest island Inish Goill according to the newspaper "Irish Times".
The Irish Specimen Fish Committee are in the process of ratifying the fish with experts believing it will go down as a record for Lough Corrib and rank as the largest trout caught in Ireland in more than 100 years.