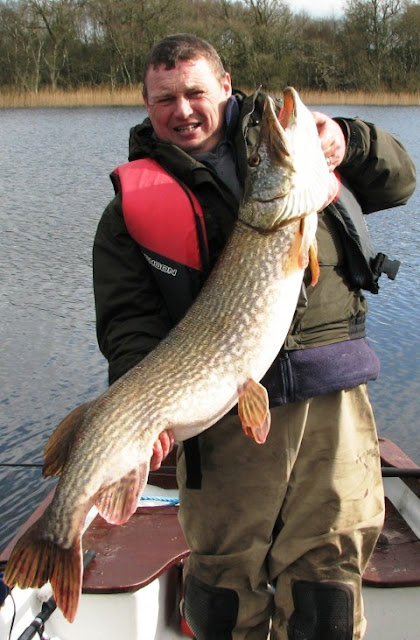 Kevin Lyons of Melview Lodge Guest house in Longford Ireland was guiding Mark Whiteside and Kerry Hardy from Northern Ireland last weekend around the upper river Shannon and what a few days it turned out to be for all concerned. Fly, jerk  and dead baits all produced fish.
While Kevin was waiting for a take on his dead bait he set up another rod and started casting around, bouncing a Bull Dog off the bottom that produced a nice fish of 24lb 3oz. After that Kerry Hardy lost a good fish and 20 minutes later Kevin struck into sizeable pike. While unhooking the fish they found Kerry’s trace still in it’s jaws from 20 minutes earlier. We carefully took the fish to the bank for weighing,  and it came in at 32lb 8oz which is a personal best for Kevin who was over the moon and still shaking with excitement an hour later.