Dennis Braid holding a potential world record fish that weighed in at (60Kilos) with the existing world record . Didn't get it qualified though and ate it instead. 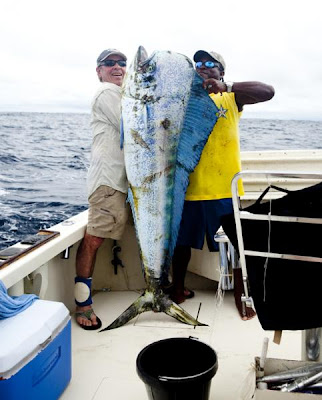 "Here's some info on the bull dorado. Last month a filming group was in shooting an episode of Best & Worst with Tred Barta, our main focus was on tuna and marlin. We were making a pass along the edge of the reef trolling live bonitas when we hooked a dorado about . As I recall we caught a couple more a little smaller, then the rod goes off and just keeps going. At first I thought it was a billfish then it jumped and it was obvious it was a dodo. But it was so far out we couldn't tell how big it was. After a few minutes I started to think this is not the same size as the others, then it started taking more line. Geez this thing pulled and when it was not taking line it would just lay broadside making it very tough to gain line. When I got it about 30ft from the boat we could see it was a big fish and it really didn't want to come in the boat.

Gaffing the beast was something else, and it damn near killed the mate. I knew it was a big fish but didn't realise how big until the cameraman sent me the photos a couple of days ago. By the way the knee pads were for protection as the transom had no padding and was very sharp & painful on the knees. The whole catch will be shown on Tred's show sometime later this year, also will include lots of other species and some unbelieveable tuna feeding footage.

I taped the fish just in case my taxadermy guy had a mold close to the specs, unfortunatly I didn't get an official weight on the fish as I didn't think it was that big at the time, and then I recieved the photo the other day and thought damn it's bigger than I thought. Oh well there must be another one just like it still out there. Thanks for the many kind responses and also the funny one's.