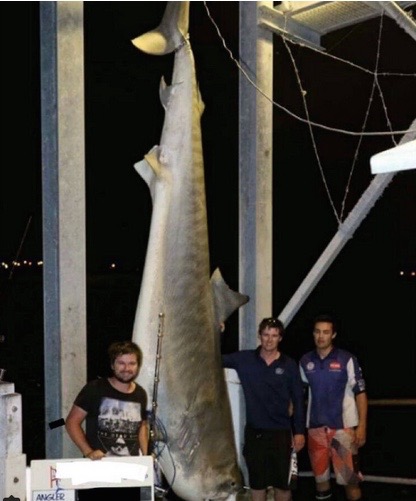 An huge tiger shark weighing 1,379 pounds  - 624.5 kilos pounds and measuring nearly 14 feet was caught this past Tuesday by an angler who does not want his name or the location of the catch revealed.

This incredible photo was posted on the "Dark Side Sharkers" Facebook page, where it was listed as a “pending world record” for 30-pound-test line.

The all-tackle record, for line of any strength, is a 1,785-pound, 11-ounce tiger shark caught off Ulladulla, Australia, back in 2004.

World Record Coordinator  Jack Vitek for the IGFA, said Wednesday that he had not heard from the angler, so there is no pending record.

Dark Side Sharkers has confirmed that the shark was not caught off Florida.