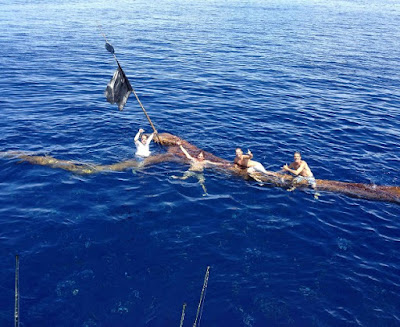 Top Capt. Randy Baker and the crew of Nomad had the trip of a lifetime during a six-day trip to the seamounts off Los Sueños, raising 160 blues and releasing 79 out of 109 bites.

On their way to the seamounts, Baker and his crew, came across a floating log that turned out to be the golden ticket to a memorable trip. The crew drifted with the log, nicknamed Wilson, for six days and more than 100 miles. Baker and crew caught four doubleheaders the first day, finishing 18 for 27, one for one on striped marlin and one for one on sailfish, completing the slam.

The following days, the crew went 20 for 26, 23 for 30, eight for 10, four for eight and six for eight on blues. In addition to an impressive trip for the entire team, on July 11 Baker became the only person ever to catch 20 blue marlin in a single day in both the Atlantic and Pacific oceans.