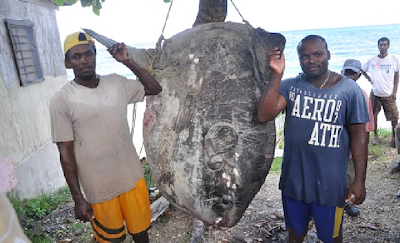 A giant sunfish  of 900 plus pound was caught off Jamaica coasts of Boston Bay by Desmond Phillips and Michael Grant.

The monster fish was so bizarre looking that one of two Jamaican fishermen who caught the fish thought it was from another world.

The two fishermen hooked huge fish with hand line and after a battle that lasted nearly 2 hours, Capt. Grant was determined not to let the unusual catch get away.

At beginning they decided to try to tie it to the boat and motor to shore, but the boat could hardly progress because of the huge weight of the fish. So they decided that the sunfish had to be brought on the small boat.

The sunfish (Mola mola), can reach weights of around 5000 lb, but are harmless omnivores that feed on sea jellies and other invertebrates and small fishes.

See more huge sunfish images and info at: Big Fishes of the World we site.