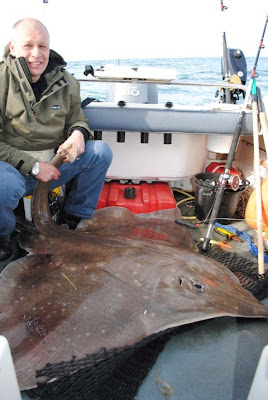 The three friends Peter, Scarb and  Mark  made a quick run to the Maidens in the Atlantic Ocean off Ireland coasts.

We went out to the place for the last hour or so of the ebb, then hopefully fish the whole flood tide up to   8.00 pm.

We all stuck down a skate bait and it wasn’t long before my rod nearly got pulled from the holder. The fish just took off, never had one run so quickly from the off. The fish was giving a very good account of itself, and the longer the fight went on the wind started to pick up

After nearly two hours the big skate finally appeared at the side of the boat and was safely gaffed and brought aboard measured and tagged it turned out to be a 115 lb - 52 kilo.