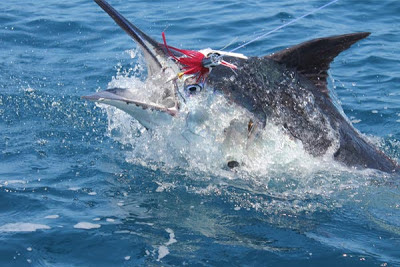 A marlin report from Ecuagringo operating in Galapagos Islands:

Feb 21,2013 was the last day for Mike Eakins and Tom Noohnan to fish aboard the Vertigo on this trip. We headed for 0-30 bank looking to repeat the success of the blue marlin activity the previous day. The skies and water were blue.
Seas calm and water 75 F. Dolphins and a few tuna were seen on the bank and we decided to fish lures and ready a 10 lb tuna as a pitch bait. We caught a few big eyes even though we tried to avoid them but they seem to be everywhere constantly making it hard to troll ballyhoo.

The morning went uneventful but our first marlin bite came around 13:40 and Mike Eakins took the rod to fight a beautiful black marlin which was released less than 20 minutes later and estimated around 350#. Next fish bit at 15:32 and was a nice blue around 500 that was brought to the double in about. 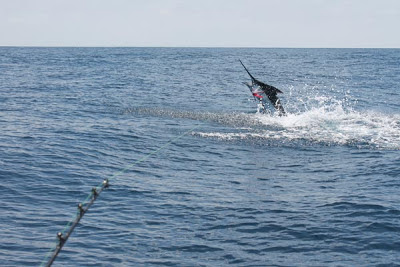